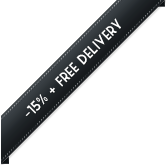 Our price per bottle: €9,40
Previous
Next

In 2001, Pierre-Henri Morel joined Chapoutier. Taken under the wing of Michel Chapoutier, he quickly rose through the ranks and is now the business director and the right arm of Michel.

In 2008, they decided to associate and produce small volumes of high quality in the spirit of "boutique winery". The vines are conducted under the watchful eye of Pierre-Henri, winemaking and aging are held at Chapoutier.

From the first vintage, the wines were unanimously approved by experts and the international press.